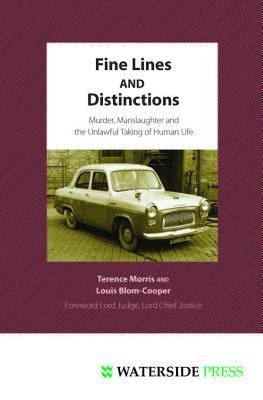 Written by two of the UKs leading experts on the law of homicide. Contains new information and analysis. Suggests a radical new solution to the mess which English homicide law has become. In this powerful account, the authors show thatfrom Sir Edward Cokes classic common law definition of murder, through political fixes, poorly thought-out compromises and misguided legislative or Executive tinkeringthe English law of homicide is in a mess. Even the most adept legal minds are faced with what has been described in Parliament as fine lines and distinctions. What must juries make of messy laws and how can anyone have confidence in criminal justice if laws affecting some of the most serious offences in the criminal calendar are deeply flawed? To make matters worse, the entire subject of homicide in England and Wales is further distorted by the existence of the mandatory life sentence for murder. Building on unrivalled knowledge, extensive research, close practical observation and incisive analysis, Professor Terence Morris and Sir Louis Blom-Cooper QC trace the development of the law of homicide from early times to the present day. They counter and dismantle specious arguments for preserving the status quo and point out that only root and branch reform of the basis of liability for homicide and its sentencing regime will serve to restore justice, fairness and political probity. Professor Terence Morris and Sir Louis Blom-Cooper QC are two of the UKs leading experts on the law of homicide, having studied developments together for over 50 years. This has led them to recognise the extent of disquiet, especially following particularly troubling cases and to conclude that the law of homicide in England and Wales is an unsatisfactory law enveloped in a political fix. Their suggestion of a replacement single offence of criminal homicide coupled with abolition of the mandatory life sentence for murder in favour of discretion at the sentencing stage demands close study by judges, lawyers, legislators, academics, penal reformers and anyone who senses that something is seriously amiss. 'This is no dry legal tome. The authors present their case in a bracing, persuasive and highly readable way... This is an important and stimulating work that should engage not just the legal practitioner, politician or law student but anyone concerned with our justice system or puzzled by the conduct and outcome of a murder trial': guardian.co.uk 'Fine Lines and Distinctions prompted me to pay more attention to and reflect further on those who have killed. Though its primary focus is the law - specifically a potentially significant improvement to the law - I also warmly recommend it to anyone interested in lifers': Independent Monitor 'This timely, provocative and certainly topical book puts forward a closely argued and well supported case for encouraging "a root and branch reform of the law of homicide" ... [and] provides ample evidence and ammunition to those who would agree that such a reform should be put in place as a matter of urgency': by Phillip Taylor MBE and Elizabeth Taylor of Richmond Green Chambers.

Authors: Terrence Morris
Categories: Law
Written by two of the UKs leading experts on the law of homicide. Contains new information and analysis. Suggests a radical new solution to the mess which

A Fine Line of Distinction

Authors: Ron Wooten-Green
Categories: Fiction
Dave Benson is mystified and driven by death-bead visions and wishes of his dear mother. After her death he embarks upon what his partner Gary describes as “D

Authors: P. Stapleton
Categories: Political Science
This interdisciplinary reader offers a fascinating exploration of the intersection of biopolitics and utopia by employing a range of theoretical approaches. Eac

Authors: Eviatar Zerubavel
Categories: Social Science
Eviatar Zerubavel argues that most of the distinctions we make in our daily lives and in our culture are social constructs. He questions the notion that a clear

A Practical Guide to International Philanthropy

Authors: Terence Morris
Categories: Social Science
This book is a powerful commentary on the law of murder (and other unlawful killings), as well as its history, modern-day development, wholesale deficiencies, a

Authors: Alan Reed
Categories: Law
This volume presents a leading contribution to the substantive arena relating to homicide in the criminal law. In broad terms, the ambit of homicide standardisa

Authors: Gerard B. McCabe
Categories: Language Arts & Disciplines
". . . [T]he book offers a source of strategies and practical solutions to vexing and recurrent problems which readers can tailor to their individual needs. . .